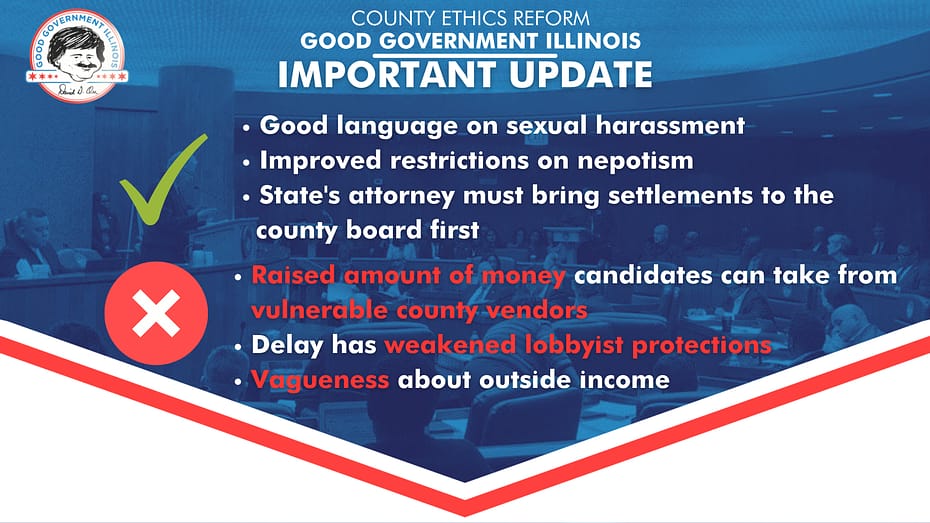 A couple of years ago, ethics reform for Cook County government appeared to be dead in the water. Good Government Illinois brought attention to the issue through media appearances, coordination with other reform groups, and a virtual town hall with major reform proponents.

Last month the Cook County Board finally passed some significant revisions to its ethics ordinance, though it also took an unfortunate step backward on campaign finance — and the two-year delay turns out to have been costly.

In 2019, the county’s ethics board held a series of public hearings on its review of the county’s ethics ordinance, and early the next year it voted to propose that the county board consider a series of reforms — banning dual employment that might create conflicts of interest for county officials; giving the ethics board the right to approve legal settlements in lawsuits brought on its behalf; updating nepotism restrictions; and importantly, adding protections against sexual harassment to the ethics code.

Shortly after that, two key board members were replaced by County Board President Toni Preckwinkle, and a third resigned in protest.

Commissioner Larry Suffredin took up the board’s proposals in late summer of 2020, but it wasn’t until mid-December of 2021 — two years after the initial proposal — that the County Board passed a set of amendments to the ethics ordinance incorporating many of the original proposals.  We should recognize the contributions of former ethics board members Peggy Daley, Juliet Sorensen and David Grossman, who initiated this process, as well as Suffredin’s role in getting it passed.

The cost of delay

Unfortunately, because the County Board took no action while state ethics legislation was being considered and passed, county regulations governing lobbyists are preempted by weaker measures in the new state bill. Notably, the state legislation has a huge loophole that allows elected officials in many cases to work as lobbyists in other jurisdictions.

Such cross-lobbying has led to legal trouble for more than one politician. In contrast, the City of Chicago enacted a total ban on cross-lobbying in 2019 and won exemption from the state bill.

In testimony at a hearing chaired by Suffredin last year, David Orr of GGI and Alisa Kaplan of Reform for Illinois warned that state preemption was a danger and urged prompt action. (Orr now rejects county officials’ claims that state legislation caught them by surprise.)

Responding to Orr’s criticism, a county spokesperson told the Chicago Tribune in December that “we will be discussing the viability of seeking an exemption for the county from the state’s lobbying regulations for the next legislative session.”

We hope they do, and we’ll be watching on this issue.

The new measure increases reporting requirements for outside employment by county officials and staff, but it omits the ethics board’s recommendation for a more sweeping prohibition on side jobs that create “an appearance of impropriety.”

“Prohibiting conflicting employment would help to end ‘Pay to Play’ politics,” Daley told the Tribune. “Until that happens, we will continue to see our elected officials leverage their positions for personal profit and sadly continue to watch them face criminal corruption charges.”

The new measure also doubles — from $750 to $1,500 — the amount lobbyists and county vendors can donate to elected officials and candidates in Cook County during non-election years (that is, in three of every four years).

That change “doesn’t do a whole lot for avoiding the appearance of impropriety,” Sorensen told the Tribune. She said the change further boosts the advantage of incumbents running for reelection.

The higher limit affects thousands of county vendors, who often feel pressured to make campaign donations, since county board members vote on every contract and other county officials often influence the process, Orr said.

Meanwhile, for several years starting in 2018, the county’s Department of Human Rights and Ethics suspended carrying out its crucial function of auditing campaign contributions by lobbyists and county vendors and requiring candidates to return donations over legal limits.

The audits resumed last year, according to DHRE director Sisavahn Baker. It’s not clear yet whether possible violations during the period when audits were suspended will be addressed.